In case you missed it, this is part three of Henchmen Don’t Have To Suck and if you’re getting tired of it, shame on you, but good news: this is the last post.

In the previous post, I mentioned that a good way to give your henchmen something to do is to make goals, plot points, that are gray. Something where it’s not a clear yes-no situation. Let’s talk about those, because those are going to be your best bet for creating tension and worthwhile minions. After all, too much of your hero wining and your villain looks incompetent – too much of your villain winning and your hero leaves something to be desired, but a tug-of-war is probably perfect.

And a tug of war is the epitome of a gray goal. 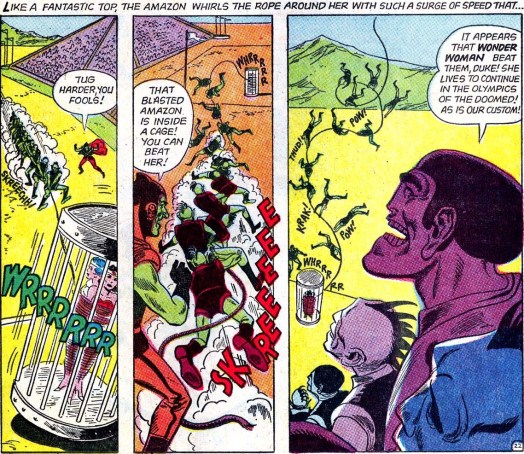 …well, there’s an exception to every rule. Even a tug-of-war can be made into a black or white situation. Taken from Wonder Woman #148.

I mentioned Lord of the Rings earlier – the big plot with which most of the good and bad guys are occupied, rather than hunting down Frodo, is war. War is a handy gray goal because of the elements of city capture, battles, siege, and strategy. As the old saying goes, “you may have won the battle, but you have not won the war” – or, your henchmen and captain villains can gain a lot of ground in fierce battles, showing their prowess in battle strategy and fierceness as warriors. However, just because they win even vital battles, the book does not have to end. A main fortress or city may be claimed by the hosts of evil, but the story does not have to end. Key protagonists may be taken in as prisoners of war – but as long as your MC can still keep on with his or her quest, the story does not have to end.

The only care you have to take when you bring in a war is that I honestly think it’s pretty tacky when the fate of the war depends on a single event happening – like, say, a ring being thrown into a volcano (going back to the idea that the plot is completely centered on Frodo and nothing else). See, the thing about WWII is that while I’m not a history buff, I’m pretty certain if we had a heroic historical assassin take down Hitler that wouldn’t have even remotely ended the war. Or saved the Jews (and disabled and homosexuals ect ect). Why? An army is made up of much more than a leader and his minions. There’s the generals and the second in command and the captains and the officers and many, many other ranks that make up the chain of command. You take down the leader and you’ve just taken down one guy. It’s the same reason America wouldn’t fall to pieces if somebody assassinated Obama – or a future president. Vice president takes over, our country flips out about punishing the assassin, we probably become more racist against Semitic people or something…and we move on. Do remember that even after Germany had surrendered, there was still Japan! Taking down just one player in a war does not end the war. Therefore your MC’s quest cannot end the war without a really good reason. Killing the leader of the “bad guys” isn’t enough. That’s not how wars work. If you’re not writing a fantasy, especially high fantasy, I imagine it’ll be easier to properly end a war…if that’s an appropriate plot for your story in the first place.

Getting X thing to undo X seal is great because we all know it’s okay for the villain to get X thing. Seals are pretty much ALWAYS broken. Always.

What about a smaller scale war? A battle of a few people? The Candy Shop Wars involves, ultimately, three main figures racing for a treasure. All is not lost when the most sinister figure gains ground on finding the treasure when things start getting to a head, not even when said figure basically has everything needed to get the treasure. Every item the kids need to get is the equivalent of a battle, and every time they don’t get the item, they’ve just lost the battle. The war doesn’t end until the treasure is found and used. Mull uses a similar gray plot in Fablehaven, with the keys to Zzyxx, the demon prison. Every time the sinister Evening Star nabs another key to Zzyxx, they merely win another battle. The war doesn’t end unless Zzyxx is unlocked and all the demons get out – and the story doesn’t end until that unsealing is resolved, whether the demons all live out in the open where they can eat everyone or else some other thing happens – I remain vague to avoid spoilers.

Video games are another medium for delivering a story

This idea of war, in its many, many forms, is a very useful plot device and it will be in most of the stories you read, at least most of the fantasy stories. Final Fantasy IV, for example, is a war of Golbez and his monster hordes against the entire world. The battles are over who controls the crystals. Technically speaking, Golbez wins, too, and gets all the crystals. Usually, for the sake of tension, the bad guy will win the war – and the heroes will somehow manage to counter that victory. I point back to The Candy Shop Wars as an excellent example of a way to have the villain win, but ultimately the heroes triumph in such a way that it does not diminish the villain’s success because it was not due to a major hole in the villain’s plans, or the villain’s minions. Then, in FF IV, winning the war meant less that Golbez had truly won, but more that a more sinister challenge had arisen and now had access to conquer everything. It might have been nice not to have to fight the terrible moon monsters and whatnot, but this more sinister monster gave the group a second chance to not lose the war – a chance at which they could not fail. The sheer difficulty in the battles made up for the black-and-white situation. You defeated the monsters not because they were pathetic but because you are a badace. Or because your mom was badace and you were just proud of yourself for getting to the final dungeon without her help, if, say, you were a seven-year-old.

The important thing is that if you have your villain and his henchmen win the war, you cannot invalidate that victory by undermining their achievement via defeating them with weaknesses woven into their victory or by erasing the victory – if the world remains unchanged by the time all is said and done, if the villains’ victory did not leave something changed, leave a scar, even if things can return to ‘normal’, then you have erased their victory. Can the villain provide tools for their ultimate defeat? Depends. Is that the only way to defeat the villain – like say, kryptonite to Superman? The villain shouldn’t be providing it. Was the tool available from neglect or incompetence? That’s bad. Did the hero have to be clever to think to use the tool against the villain? That’s good! Just always take caution when you can link the villain to their defeat – if the villain could have and should have been able to prevent their defeat, then don’t defeat them in that fashion.

The same rule follows for the villain’s henchmen – and a villain can’t fight a war without henchmen. A good villain has good henchmen; good henchmen don’t hand the heroes the key to ultimate triumph, even accidentally.

What if a battle of any type between two or more parties doesn’t fit your story? An interesting type of plot is the one where the villain knows everything and the hero, nothing. The hero is trying to figure out what the villain is doing and the villain is busy doing it. In this case, the henchmen are both the pawns of the villain and a big clue in determining the villain’s goals. However, the clue can’t be great. It should be like playing a game of chess, where your opponent’s movements can suggest their strategy. A grand chessmaster can tell early on what the strategy is; someone like me who has a grasp on basic strategy and nothing more will realize how the movements all fit into the strategy usually just before or just after the defeat. Your heroes should probably be somewhere between the two, unless your main character is of a Sherlock sort.

This is probably my favorite series

An example of a villain who knows all while the heroes still don’t know what they’re up against are the second two books in the Mistborn series by Brandon Sanderson. If you haven’t read the trilogy and you like fantasy of any sort, you should abandon my paltry blog post to go read his masterpiece. If, for some reason you’re still here without having read the trilogy, let me try to proceed without spoiling anything. In the second two books, an enemy that wants to destroy the world is making careful moves to accomplish that goal. He’s not as present in the second book, since an actual war is distracting the heroes from noticing his subtle movements. In the third book, determining the nature of this enemy and how to even fight him is a major plot point – a legend that’s been around since book one finally becomes extremely relevant and determining who and what the ‘Hero of the Ages’ is proves itself to be the winning move for the protagonists.

I love this enemy’s henchmen because of how powerful and sinister they are. They are completely connected to their master, and are so like chess pieces in his hands, to move as he tells them to and do as he needs that they are the perfect minions. For one thing, they’re just so danged hard to kill while proving themselves to be incredibly deadly. For another, they can be used in subtle ways just as easily as their use in “Oh snap! We’re screwed” reveals.

To what this all really boils down is one simple truth. We already know that your hero is only as good as your villain. However, your villain is only as good as his henchmen. If he doesn’t have any, well, he’s his own henchman then and the process is simplified somewhat, while your villain’s ability to act is limited. But a good villain, as I stated earlier, will have good minions. Any villain who cannot monitor the activities of his henchmen or who hires and keeps on a poor minion is a fool. When a minion keeps messing up, we don’t ask why the minion is so stupid, we ask why the overlord keeps him on. Henchmen don’t need to suck; there are goals they can accomplish without killing your story, and when they are able to succeed, they look a lot better. If it seems wrong for your henchmen to win, maybe they need a little more fleshing out, as depth will help them seem more powerful. And maybe after they win, their master can take them out for that chicken dinner. (Get it? Winner, winner, chicken dinner? Never mind.)

It’s not terribly hard if you give it some effort: Henchmen don’t have to suck.

An aspiring author, artist, avid consumer of storytelling medium, gamer, psychologist (insomuch as one with her bachelor's is a psychologist), wife, mother, DM, Christian, a friend to many, and, most importantly, an evil overlord.
View all posts by Rii the Wordsmith →
This entry was posted in Presentations and tagged antagonist, gray, henchmen, minions, villains, writing, writing tips. Bookmark the permalink.