I Have Been Rejected!

Posted on September 1, 2014 by Rii the Wordsmith

Good news, everybody! (Two bits, if you read my post yesterday – I’m still posting! I wrote this about a week earlier, shortly after the event happened. I’m glad I can still post on time.)

Back in…say May, maybe even April, I became aware of an opportunity to write a short story for publication. The theme was “strange little girls” – like Alice in Wonderland or Wednesday Adams or even Drusilla. I wrote a short story, much to my own shock – ordinarily the shortest story I ever managed to write was about 50 double-spaced Word pages (my poor creative writing teacher did not take me seriously when I asked her if there was a maximum on our satire stories). And then I took that short story, and I edited it, and submitted it to both of my writing groups, and presented it to some beta readers, and edited it, and edited it….and edited it…

And then in mid-June, I submitted it. My first submission to a publisher ever.

And a few days ago, I got a reply!

You should know from the title of this post that it was a rejection.

Here’s a picture of me with a print-out of the email rejection: 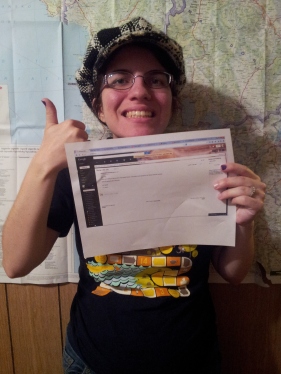 That’s a map of Albania behind me, if you were wondering.

Why am I smiling? Why do I look so pleased? I was told by a publishing company that they didn’t want my story – even though I wrote the story specifically for them! Wasn’t the rejection hard? Didn’t it make me cry?

Yeah, it did. I actually saw the email when I just sat down with a spare moment early in the day in the office at work and I really should have waited to open the email until I got home. But that would have been like, six or seven hours later and I was immediately far too excited and instantly opened it. And when I saw their very polite declination to include my story in their anthology, all I wanted to do was crawl into bed, and wrap myself up in the sheets, and quit life to become a burrito. I wanted to cry into my husband’s chest for a couple of hours. I wanted anything but to be sitting there, shedding silent tears, hoping none of my coworkers noticed because if they even knew I was a writer, I wasn’t certain they’d really understand how much this first rejection stung. Even less, I wanted to hear my phone ring and have to answer it and pretend I was having the best day ever and that I so much wanted to make the customer’s day better, too. I was very, very lucky I only received route business calls, no angry person calling to complain about such-and-such because I don’t think I could have handled it at the moment.

After a little bit of time, maybe an hour or so, the pressing need to burst into tears faded. I was still morose. I still wanted to cry. But pretending to be happy while at work was possible, and I began to think of what I wanted to do when I got home, when hopefully I was a little less sad. I still needed time to mourn, but I did eventually want to celebrate the fact that at least I’d tried. A friend messaged me, making sure I was doing all right, and we planned to go for ice-cream in the evening. An outpouring of encouragement of all sorts came in response to my facebook post about the news. I began to feel a little better, more and more, in waves – macabre, teary, macabre, sad, neutral, sad, macabre.

By the time I got off work, I was hovering more at sad and neutral. I tried to call my parents, but they were busy. I was received by a husband who had baked me cookies – some Pillsbury package I’d bought a few days ago because they’d made some new cookies with a filling that looked freaking delicious (They totally are, if you see them in your store and aren’t opposed to Pillsbury cookies, you should totally try them.) We took a nap. We woke up, went to the agreed upon ice cream parlor where earlier mentioned friend and her husband met us, and had a fun evening talking about random stuff. I wasn’t sad anymore. I was happy.

I’m not happy I was rejected. That sucks. It’s not surprising, not at all – my first submission ever, after all, even though the story was good. But it still stings. But I’m happy that I tried. There’s a lot to celebrate here. I wrote a short story – me! Long-winded, detail-everything Rii the Wordsmith, I wrote a short story! That’s amazing. And then I edited it. Not just once. Several times. Carefully. To what I feel is as close to perfection as I’m going to get with it, at least for now. I polished it to a point to where I would not be ashamed to submit it, where I cannot say it was not accepted just because I hadn’t cleaned it up enough. In other words, I completed an entire editing process. That gives me a lot of hope for me to do so with my novel, even though my novel is much longer and that editing process is dragging on and on for me. I can do it. I can do it for a short story, I can do it for a novel. And then, after I wrote the thing and edited it properly, I submitted it. Do you know how hard it was to submit it? I wrote my cover email letter thing whatever, and I attached the file named just as the publisher requested, and I typed in the publisher’s email address, and then my mouse hung over ‘send’. And I panicked. And I knew I couldn’t send it because they would hate it and write back to tell me I should never write again and they needed a physical mailing address to send me the ashes of my short story so the message could sink in and- and then I clenched my eyes shut and hit ‘send’. I hit send and immediately panicked to a higher degree, for about a week. And then I stopped panicking and eventually mostly forgot about it. I did that. And then, after many, many weeks of waiting (but still within the time frame they gave me for response), I got a reply. And the reply was not that it was terrible and I should stop writing and they needed a physical mailing address. The reply was just that they didn’t think it was quite right for the anthology and good luck elsewhere. They said “thank you for letting us read your story”. That might be a nicety, but they still said it.

I completed an entire submission process.

I did it and I didn’t die or combust or find myself banished from writing.

I may have been rejected, but I feel pretty good.

Dear aspiring writer followers, I hope you likewise find joy in your future rejections as well – and I hope you have the courage to hit that terrifying ‘send’ button in the first place, too.

An aspiring author, artist, avid consumer of storytelling medium, gamer, psychologist (insomuch as one with her bachelor's is a psychologist), wife, mother, DM, Christian, a friend to many, and, most importantly, an evil overlord.
View all posts by Rii the Wordsmith →
This entry was posted in And Other Things, General Writing and tagged publishing, rejection, writing. Bookmark the permalink.