WHO COULD HAVE FORESEEN THE RETURN OF THE RECURRING VILLAIN!

As I did say it’d come back eventually, it can’t be too surprising, right? But maybe you forgot about it? What better time, then, for the recurring villain to come back.

However, I believe generally speaking, the recurring villain should appear at the worst possible time. 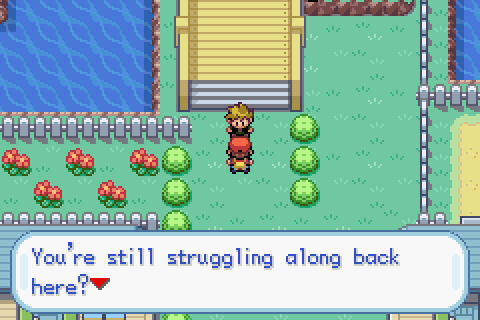 FFFFF- I’m not in the mood to fight you, Gary! (at least it was near a pokecenter this time – I always forget he shows up on the SS Anne and in Sylph, when my team is badly worn from fighting sailors or rockets.)

So what are some poignant times? There’s no good from a recurring villain showing up unexpectedly if their unexpected visit has no emotional impact or…any impact, really, on the story.

There are, as I see it, two ways you can approach this. The recurring can either be the sole trial, with all the focus on him/her, or else the recurring can be the final straw.

An exception to this is with the Goldfish Poop Gang, but to follow through with the scene, the Main Villain or some sort needs to succeed where the GPG failed: when the GPG utterly fails to get the MacGuffin, the Main Villain needs to swoop in and grab it while the heroes are distracted dealing with the GPG, for example.

The recurring could also show up at an “almost there” moment – remember in the Wizard of Oz when they’ve finally gotten out of the forest and they just have to go through a field to get to Oz? That moment of “Oh, hooray! Look, we just have this one easy thing and then we win!” should pretty much always be interrupted by something, and a recurring villain is just as good if not better than most things. Like poppies. Which even in the book was a little lame – why on earth would the witch choose something to which two of the group members are immune!? or maybe the poppies were just there in the book, it’s been a while since I read it…anyway that moment is a great time for a recurring to show up.

Likewise, when the heroes are in bad need of a sanctuary, and are just crawling to one, so close, no more obstacles – what could possibly be worse than a recurring to show up right then? The best part about this is that a sanctuary can be anything – it doesn’t even have to be about physical wounds, like Red crawling to a pokecenter when Blue shows up grinning like the huge jerk he is. This could be prime time for an Unpleasant Associate – when the protagonist has been destroyed by the events of the day, and is seeking out comfort, what better way to induce crying or breakdowns than sticking the Unpleasant Associate just between the hero and the exit?

Even the GPG can be effective here. There’s no better way to complete the exhaustion than to add one more thorn.

This idea leads right into final straw moments – but different from crawling to a sanctuary, final straw moments have not and do not indicate any breathers, not recently, not any time soon. And just when everything has been going wrong, and everything’s been too hard, and nothing could possibly get worse, the recurring proves the diagnosis wrong. The GPG can become dangerous in situations like these, too, as there’s so much else happening that perhaps the heroes cannot even focus properly on the GPG. The struggling student can forget to eat breakfast, run late to her first class, have a fall-out with her bestie, find she’s on the brink of break-up with her boy, realize she didn’t make the team, and then realize she forgot to turn in her homework to the Unpleasant Teacher Associate – for him to smile down at her when she’s five minutes late from the due date and say “No, I will not accept this.” Friggun Gary can show up with his stupid fresh team of pokemon after I’ve just battled up my way through an entire building full of poisonous, exploding koffings and hatred-induci-er, confusion-inducing zubats and Rocket’s other stupid teams wanting to battle. The traveling band can have just barely escaped death from The Dangerous Forest or Mountain into the cover-less Plains, broken and bruised and out of food and still pursued by Evil Beasties and in a sour mood towards each other when The Pursuit shows up – or perhaps The Pursuit shows up after a huge fall-out when the protagonist just wants to be alone and no one will be looking for him quite yet while he blows off steam.

What are some examples of non-inconvenient or not necessarily unexpected shows? Right after it seems the recurring’s been permanently removed from play, perhaps they show up later on a camera or TV or some other long-distance device, showing they’re not dead. Perhaps you’ve been building up to an ultimate show-down – it’s expected they show, then, and they almost had better. And perhaps there’s just a comical run-in at the grocery store. Maybe they’re a cashier. Or maybe the protagonist is when the recurring is shopping.

The important thing is to wait for the poignant times because the recurring can’t show up too often. Remember the difference between a main villain and a recurring is how present the recurring is on the forefront of both reader and protagonist’s mind. If we don’t forget about them shortly after they leave, they’re slipping into main villain territory. Show them around too often, and we won’t forget.

An aspiring author, artist, avid consumer of storytelling medium, gamer, psychologist (insomuch as one with her bachelor's is a psychologist), wife, mother, DM, Christian, a friend to many, and, most importantly, an evil overlord.
View all posts by Rii the Wordsmith →
This entry was posted in Making Villains (Making Villains la-la-la!) and tagged recurring villains, villain, villains, writing, writing tips. Bookmark the permalink.