Why Is “The Devil is a Part-Timer” So Funny?

Posted on September 7, 2015 by Rii the Wordsmith

If you don’t know the show, I’m talking about an anime that is freaking hilarious. It’s one of the funniest things I’ve ever seen. It’s also unfortunately quite short and leaves loose threads hanging because it didn’t get as many episodes/seasons as it needed, but there’s always the manga. 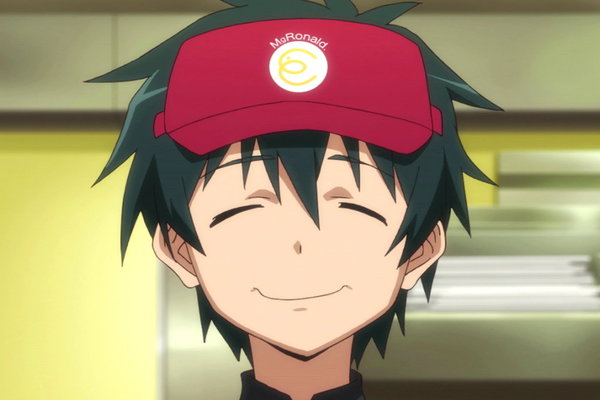 I present: The Devil

What’s it about? Well, it starts off in Anime Fantasyland where The Destined Hero is fighting The Devil who was leading a campaign of blood and slaughter across Fantasyland to take over the world. It’s a highly typical and even cliche scenario for any fantasy story. Right as The Hero is fighting with The Devil, the climax of the fantasy story (this is like the first ten minutes of the first episode), The Devil grabs his last remaining general Alciel and hops through a portal to another world to regroup and recover. The Hero dashes after him.

That portal leads to modern-day Japan, where no one’s magic powers work. (Okay, they do, but only under special circumstances.) Now as a human(ish thing), The Devil has to eat. The two of them also need a new “castle” (or upstairs apartment, they’re basically the same thing). They need…jobs.

So The Devil takes on the new identity of Sadao Mao and gets a part-time job at the local McDonald’s (MgRonald’s, whatever, we all know what it really is). And you better believe he is the best, most model McDonald’s employee that ever served up a batch of fries. (The Hero gets a job at a call center.)

Why is that funny? I mean, it’s just a guy with a job doing it as well as he can for a promotion. Who also happens to be the lord of darkness who will one day conquer the earth. No big deal. Why is Alciel staying at home and working like a devoted housewife worth giggles? Some of the humor probably would have been funny with two regular guys anyway, but something about their demonic origins just makes it…funnier.

I mean, Buffy capitalizes on whatever it is that makes it funny too. Plenty of things do.

I’m not a comedic expert, but I guess it’s because of context. Demons are a highly unusual, fantastic, irregular occurrence. So they don’t really…do the mundane. Like working at a fast-food restaurant. It’s a reversal of expectations and everyone knows that’s comedy gold.

The thing about it, though, is that Mao’s occupation and situation aren’t why I don’t take him seriously as a villain. I don’t take him seriously as a villain because he’s not a villain. Sure, sure, he’s The Devil and all that but he’s the protagonist and we get a good look at how honestly, his reign of blood and horror had more to do with just not really understanding humans and trying to look after his own more than being evil. As he starts to get the whole “human” thing, he cares for humans just as much.

So that being said, is it possible for a funny villain to be taken seriously as a villain?

I don’t see why not. I mean, Mao still takes all of his world domination schemes very seriously. A villain could have a desk job, hilarious as that is, but still be truly sinister. He can ride a bike to work, name his bike Dolahan, but still be a force with which to be reckoned. After all, a child can be a villain. When the child is the villain, silly, petty goals are expected, yet, the execution can still lead to the audience saying, wow, that kid sure is evil – taking her seriously as a villain.

Petty goals, still a real villain. Why should hilarious circumstances be any different from petty goals? Look, what matters is what your villain is like inside. No matter how funny they are, and taking their circumstances very seriously the way Alciel and Satan do, talking about their pittance of yen like an overlord’s treasury is pretty funny, if they’re still serious about their goals and their motivations are evil and careless, then they’re still a villain. Of course, it they’re incompetent or you never let them have even the tiniest win, the reader/viewer still can’t take them seriously. Who ever does take a buffoon seriously?

Has the motive, has the comedy…has no success.

But ultimately, it’s still the motive that counts most.

Why is “The Devil is a Part-Timer” funny? It’s situational comedy, a reversal of expectations…why else? I don’t know, I just know it is. But what can we learn from it, about villains? Funny shouldn’t impede evil enough that your villain can’t still be a real villain.

An aspiring author, artist, avid consumer of storytelling medium, gamer, psychologist (insomuch as one with her bachelor's is a psychologist), wife, mother, DM, Christian, a friend to many, and, most importantly, an evil overlord.
View all posts by Rii the Wordsmith →
This entry was posted in Making Villains (Making Villains la-la-la!) and tagged comedy, humor, the devil is a part-timer, villains, writing. Bookmark the permalink.