Reminder: This post is 5000% spoilerific and you can’t enjoy Undertale very well if it’s been spoiled for you; novelty is important to the experience. It’s cheap, it’s on Steam, go enjoy it, probably don’t do genocide.

Now, on to talking about doing the genocide path.

The genocide path brings in a mostly unseen villain. The fallen human and the player character are not actually the same person, yet in a way the player character IS Chara until Chara is fully reincarnated. Frisk’s name is never spoken in genocide, so it’s like Frisk doesn’t exist; there is only Zuul. I mean Chara. Whatever.

Chara is something more of a primordial evil. And yet, it’s not quite that, either. Chara expresses xherself – the gender of neither Frisk nor Chara is ever revealed, and is frankly irrelevant  – as that feeling you, the player, get when you level up, when your stats increase. In my interpretation, Chara is calling xherself the drive behind the hack and slash. A spirit of destruction. The utter lack of care about who you are destroying in favor of your own gain, of growing stronger, the glee at being so strong that nothing, nothing, can stand in your way.

Ultimately for me, this means I’ve always had Chara with me, since I’ve done enough grinding to experience that glee of tearing through monsters. What, you think you’re big and tough? I am over leveled. Now die! HAH!

And yet, it isn’t as though I’ve never considered what I”m killing. If the game says it’s “just monsters”, well, that’s the point of Undertale, isn’t it? Are they “just” monsters? But it’s arguable that the monsters in Undertale aren’t really monsters at all. They’re sentient beings who have a different set of souls and different powers from humans, and they look different. That’s all. In which case, the one who doesn’t care what or who they are is the real monster – that means you and Chara. But more on you later.

I’ve thought about the things we kill in games for exp. In tabletop games like DnD, I don’t enjoy pure hack and slash. We’re dealing with some goblins? Well…I speak gobbledygook, can I try to roll diplomacy? Everyone looks at me like I’m crazy. Usually the DM makes it clear that they’re cannon fodder, won’t speak to me or won’t speak much. (Depends on the DM. I’ve had some great ones.) I just…would like the chance to talk to the monsters and see if they aren’t people too. And Undertale gives you that chance.

And Undertale chides you if you don’t. Hah. Chides. No.

You lose everything if you don’t. 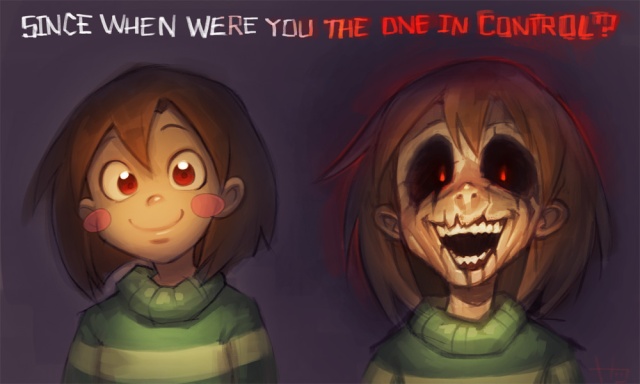 You are such a slave to your need to kill it all that you can’t ever really have peace. That in the end, even if you decide to save everyone, you’ve let Chara be your ruling motivation – you won’t let them stay saved. You’ll kill them all for exp eventually. That’s who you are, when you don’t even try to find out who you are killing. You aren’t the one in control. Your drive for hack and slash is.

I’ve heard people suggest you beat Chara by wiping the computer of xer presence. Or that it would be cool to have Chara be a villain to fight. But you don’t beat xer that way, either way – you cannot defeat violence with violence. In trying to be strong enough to kill Chara, you are evoking the very spirit of Chara, so how in the hey is that supposed to defeat Chara? And just wiping the memory of what you did isn’t enough either. As long as you carry with you the drive to kill and become powerful, Chara wins.

I did wipe my computer. It was a little difficult to figure out. But the hack and slash stain remains, and it always will. Flowey’s soul was just lost; Chara has no soul, and if you invite Chara in, neither do you.

An aspiring author, artist, avid consumer of storytelling medium, gamer, psychologist (insomuch as one with her bachelor's is a psychologist), wife, mother, DM, Christian, a friend to many, and, most importantly, an evil overlord.
View all posts by Rii the Wordsmith →
This entry was posted in Making Villains (Making Villains la-la-la!) and tagged Chara, undertale, video games, villains, writing. Bookmark the permalink.