I Scream, You Scream, We All Scream…For Torture!

This one’s a huge pet peeve of mine. You have your hero in the terrifying dungeon of the bad guys, and they come in and do some horrible things to him/her, and…

The hero, being a Super Tough Guy ™ – you know what this is a way bigger problem when the hero is a guy so – the hero, being a super tough guy, “refuses to give [villain] satisfaction” and stays quiet. The big bonus round is if they also don’t do much – no (or little) flinching, gritting of teeth, clenching of fists, curling of toes, squeezing their eyes, etc…which makes ME grit MY teeth, clench my fists, flinch, and even howl out in pain.

That’s because reading about another stupid hero who won’t scream for torture is torture to ME.

Yeah see unless your dude or dudette (but again a big problem with the macho heroes) is SPECIFICALLY TRAINED to handle extreme duress with a poker face, he darn well better be screaming his face off when the villain is trying to rip it off. Because you know what? Pain hurts. A frickton. We should all be pretty familiar with this, because:

I mean it’s a great many other things too, but it’s feeling, and sensation, and a lot of those feelings and sensations are painful. That’s an essential part of life.

And when you get hurt, you react.

Look, I know how we all wanna be tough and we look up to the cool guys who CAN tough it out. Well, honestly, I mostly want to whine when I’m in pain, if it’s moderate or worse. But it is true that I want to mitigate my reactions as much as possible when I’m doing something medical. If I’m getting a shot, I try really, really hard to be a Big Girl ™ and just take it, no reaction. And you know, aside from a slight flinch in the face, I usually do.

I might have mentioned that I am quite familiar with all sorts of degrees of pain. You know what else I learned from all those experiences besides how to describe pain? That you don’t sit still when it happens, no matter how much you want to be a Big Girl ™. You just don’t. When you get hurt really, really badly, beyond your ability to cope with the pain, you writhe around in pain screaming and crying and wishing for death.

But okay, you want your hero to be the big tough guy. What does So Wimpy And Little She Can’t Even Donate Blood® know? Let me make the case that you DO make him tougher by having him react, and you also make your villain stronger, too.

Your hero is a cardboard cut-out without human reactions.

Unless your hero has established training to prevent reaction to pain – and I don’t mean a lot of experience with pain, because lots of exposure to horrific occurences just means you get hurt a lot, I mean actual training – if he fails to react to what is happening to him, it must be because he can’t actually feel anything because he’s made out of cardboard. You diminish the humanity of your hero. Real breathing living thinking feeling sentient beings react, at least a little, to pain. If your hero doesn’t, he must not be a real breathing living thinking feeling and/or sentient being, ergo he is cardboard. 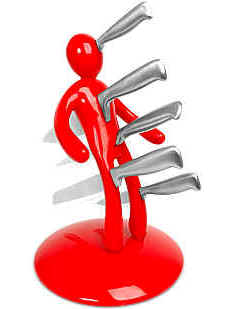 Your villain comes off as incompetent.

If your character is usually not cardboard, his brick-strong lack of reaction makes the PAIN not real. I mean if he can withstand it so totally, it must not actually hurt that much.  If you are literally describing what is happening to him, that creates dissonance. It doesn’t sound so much like the intestines they’re ripping out hurt a ton but your hero is just so tough it’s whatever – it sounds like maybe the villain is so incompetent he can’t make evisceration hurt. So – either your hero is cardboard, or your villain is a loser who can’t even torture someone right, or both. Don’t forget – it hurts your hero if your villain sucks, so everyone loses.

The reader cannot relate to your hero’s pain if he isn’t feeling any.

It’s going to make it hard for the reader to sympathize with what is happening to your hero if you tell them but don’t show them – I mean, you’ll still get a good flinch when you say, “metal hooks through his eyelids held his eyes open” (Props to Andrew Whittaker, that was a fun chapter to read) but then things get weird if dude is just sitting there like his eyelids held open with hooks is nbd. (He’s so informal about it he’s using chatspeak, you see.) I’m going to relate a lot more to him if he’s more like, “aaaaaaah there are hooks in my eyelids aaaaaaah my eyes and my eyelids hurt so badly aaaaaaah!”

Choosing smaller reactions is more likely to make your hero seem tough than none at all.

Choose what responses he displays wisely. When I’m undergoing torture (it’s usually called a pelvic exam, but I have a medical condition that makes it torture instead), I’m dealing with a doctor and therefore trying really, really hard to just lay still until the doctor is done. But it hurts enough that I can’t help but squirm, grasp at the…chair thingie doctors have, grind my teeth, and sometimes, with a particular jolt of pain, a little whine slips through. This is me at my bravest, toughest, most determined to not show that all that’s on my mind is, “frick frick frick omg stop holy heck are you done make it stop frick frick frick frick.” Or possibly swearing, I’ll never tell.

So consider full body movement, like writhing, squirming, trembling; single areas of the body like the hands, jaw/teeth, eyes; breathing patterns, like sharp intakes of breath or panting; noises from screaming to weeping to groaning. If your hero is Big Tough Guy ™, maybe he might say the boring mantra of, “I won’t scream, I won’t scream.” And maybe he won’t. But maybe he’s trembling so badly that now he’s straining his own muscles in protest to the pain as he tries to hold in that scream. Maybe he’s flexing his fingers as he holds back the tears. And maybe it’s been going on so long that his mind is shattering and the reaction is psychological and a modicum of insanity – though I’m gonna say you should probably include major physical reactions if you aren’t going full focus on the mental.

One last thing – these moments of torture between villain and hero are, in their own way, intimate; it builds a specific type of relationship between the two. If you were writing a romantic scene instead of a torture one, and the hero just sat there like a brick to all of the villain’s ministrations, that would really ruin the scene, and put a big block between any developments that ought to be happening – or crush some serious credibility for developments that happen anyway. I mean, if the hero, after bricking it through a romantic moment with the villain, comes to them later and says something like, “that was great, I’ve never felt this way before,” I’m not really going to buy it. It’s no different when the hero bricks it through torture and then bellows, “I hate you for all you’ve done to me!” or whatever. It’s just not as strong.

Torture is, in its own right, an intimate thing.

That’s why sleazy magazines could TOTALLy be villain mags if you just change the picture in the middle from some photoshopped female to a belted up guy whose feet I didn’t want to draw. I guess the difference between “sleazy magazine” and “evil magazine” is consent.

So take the time to do it right if you’re going to do it at all. Make the villain competent. Make the hero human. Make the scene actually matter.

An aspiring author, artist, avid consumer of storytelling medium, gamer, psychologist (insomuch as one with her bachelor's is a psychologist), wife, mother, DM, Christian, a friend to many, and, most importantly, an evil overlord.
View all posts by Rii the Wordsmith →
This entry was posted in Making Villains (Making Villains la-la-la!) and tagged heroes, pain, torture, villains, writing. Bookmark the permalink.

5 Responses to I Scream, You Scream, We All Scream…For Torture!